Some characters in Malifaux have suffered setbacks that have removed them from the story (such as imprisonment or death). In Malifaux Third Edition, Dead Man’s Hand models may still be played in casual formats, but it will be up to the tournament organizer’s discretion whether or not to allow them in competitive games.

Included in this Pack are all Dead Man’s Hand Stat Cards* and their associated Upgrades.

*Does not include limited or alternate model cards.

What is Dead Man’s Hand?

As of the start of Third Edition, some of our characters have suffered setbacks that have removed them from the story of Malifaux. As a result, these characters have updated stat cards and can be found in a special «Dead Man’s Hand» card pack.

By default, Dead Man’s Hand models will not be tournament legal. Though for tournament organizers that wish to allow it, the option will exist to for these models to be played in tournament play. 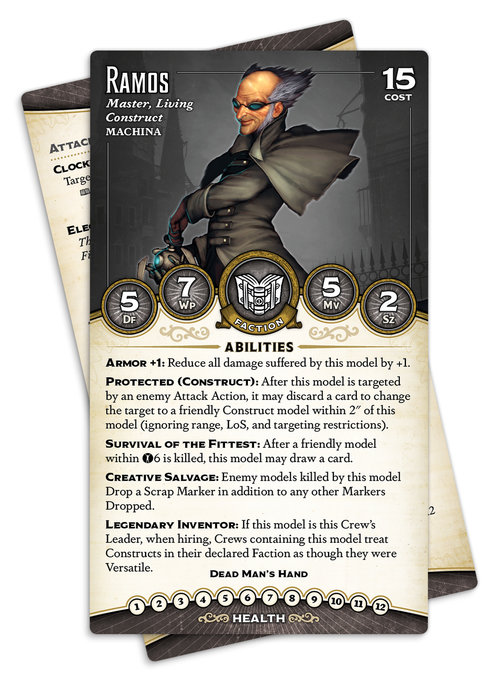 Lilith: In Broken Promises, Lilith fought a battle with her sister, Nekima, for control of the Nephilim and lost. To save her life, Zoraida cast Lilith into Nythera, the magical prison that had previously held Titania for thousands of years. Her Cherub quickly flitted away, lest it bear the full brunt of Nekima’s vengeful victory.

Ryle Hoffman: At the end of Ripples of Fate, Charles Hoffman learned that his brother had perished many years ago and was only a mechanized corpse that he had been subconsciously puppeting around. In memory of his brother, Charles ensured that Ryle received a proper burial.

Victor Ramos: In Broken Promises, Victor Ramos was betrayed by Toni Ironsides, who sold him out to the Guild. He was subsequently captured by Sonnia Criid, who arrested the former union president, removed his mechanical arm, and sent him back through the Breach to Vienna, where he is now held in a Guild prison. The Brass Arachnid and Electrical Creation were subsequently destroyed by the Guild.

Nicodem: Suspecting that he would seek vengeance for their interference in his plans to seize control of Malifaux City, the Ten Thunders manipulated Nicodem into a conflict with Lady Justice. After a fierce battle (and a community vote at GenCon 2017), Lady Justice succeeded in killing the necromancer and rendering his body unfit for reanimation. His soul endures in a Soulstone possessed by his former assistant, Mortimer. Following his death, the Vulture took flight and has not been seen since.